Even though a “horizontal structure” is flat in nature, it does still need a (vertical) support structure. 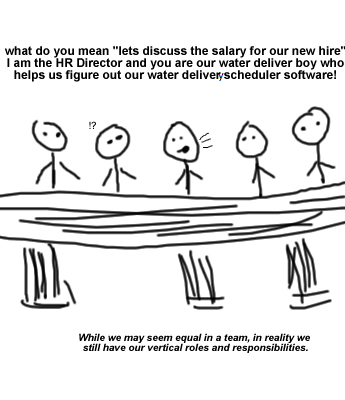 The main purpose of a support structure is to help managers build lasting relationships and achievements with teams. There are two basic type of support structures that managers can mix and match when building or working with teams, depending on the requirements as each has its own attributes.

It’s important for management to recognize what type of structure needs to be in place and when its put in place; as “when” a structure is erected, it can play an important role in the success of the teamwork initiative. If too much formality is introduced early, people might feel there is no difference in the “horizontal structure” and the “vertical structure” where vertical structures are rigid, formal and bureaucratic and would be less motivated to work with the initiative. In contrast, waiting too long to build a support structure or the lack of a support structure can hinder the ability of the team to successfully work together as a team, especially when they need to be able to adapt when in tight spots.

[Source: Moving from the Heroic to the everyday: Hopkins, Couture, Moore]