Are we there yet?

Sharing progress on a revolutionary (or even an evolutionary) innovation becomes a challenge when not everyone speaks the same language – Core teams have worked the way they have for years and the MVIT operates with a completely different rule book (or at times; no rules).

A quick reference to the differences between the Core and the MVIT from a previous Blended Innovation Model post: 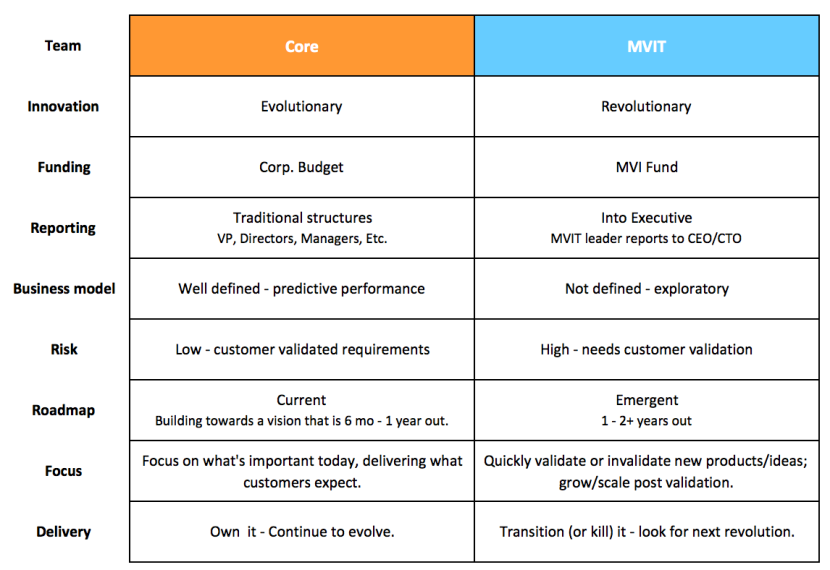 Core teams generally function as a well-oiled machine and follow a SDLC that covers some, if not all of the following:

When looking at the interplay between the Core and the MVIT in a blended innovation engine we should look at how the MVIT lines up its efforts in relation to the existing SDLC (the well-oiled machine everyone is used to); Ideally we end up with two independent cycles that intersect or allow the movement (of products from the MVIT into the Core).

If we list out the various stages across development and implementation and assign responsibilities in the context of Revolutionary vs. Evolutionary innovation projects, we get a holistic view of where and when the MVIT is engaged.

For revolutionary/exploratory innovations – the MVIT (only) will start with POC’s and pilots in a vacuum to prove the value, and once it does, it will look at integrating with core to release the product in a limited scope for additional customer validation. Once larger validation has been performed the product will move to the core team for general availability. The matrix below helps illustrate the primary team(s) responsible for the slot/phase. 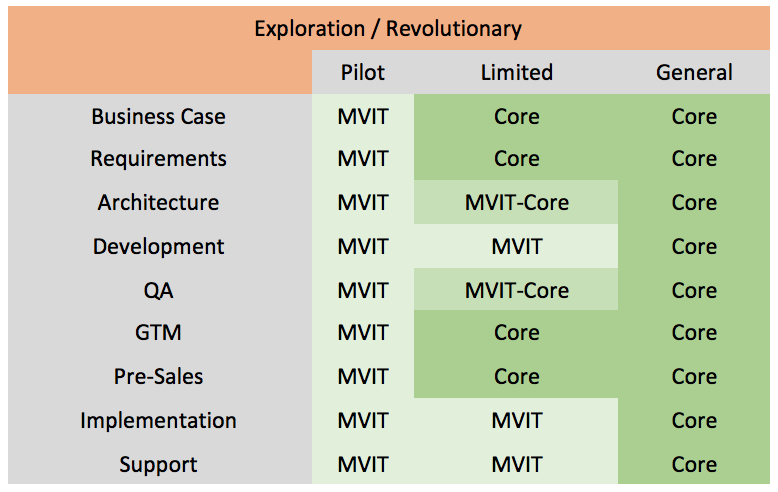 For Evolutionary/ Growth / Acceleration innovations – the idea has already been validated and the primary purpose in MVIT’s involvement is to help rapidly pilot and accelerate the development so that It can be integrated and added without negatively impacting the product roadmap. The Pilot and Limited stages are identical as there really isn’t a pilot phase. Once larger validation has been performed the product will move to the core team for general availability. The matrix below helps illustrate the primary team(s) responsible for the slot/phase. 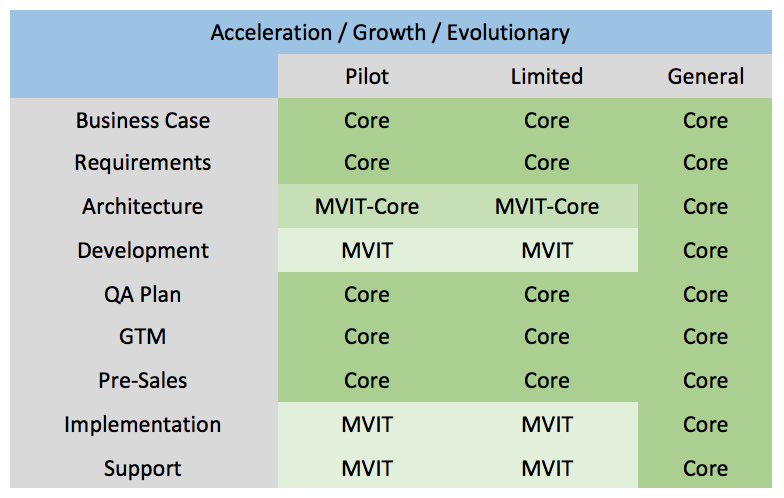 Based on MVIT’s roles and efforts above – we can summarize and group MVIT’s role and efforts into 4 major phases and refer to it as the Blended Innovation Life Cycle (BILC):

During the MVP phase, the MVIT is focused on three progressive stages:

It’s very likely that the MVIT never gets to stage 3 for majority of the ideas – but for the ones that do make it to the third stage – they then move to the next phase: “Viability”.

In the “Viability” phase the focus is on (internal) Customer Validation – the MVP is shown to the product team and other product roadmap stakeholders (like sales leadership) to assess business value. The product team would look at how the idea would enhance the product roadmap and would help define how the product would integrate with the core. A decision is made to move forward and to introduce to additional customers via limited availability.

In the “Production” phase, the focus is around Limited Availability stage – the MVIT works with the Core Product team to build a closer integration where architecture, integration approach, development, QA implementation and pre-sales plans are defined, development and implemented (by MVIT and Core). For customers who enter limited availability, the MVIT is responsible for supporting its product(s) where MVIT will not only provide front line support where needed, but also deploy and maintain deployment environments.

The “Scale” phase is focused on two final stages

By defining the “BILC” in the manner we did – where the core team becomes an integral part of the innovation directly after the pilot, we help implement a process that allows a natural alignment to the Core’s SDLC and we don’t end up with a team that’s releasing under-baked products that don’t integrate well with the core product.

We can also number each stage in the “Blended Innovation Life Cycle” to obtain an “Innovation Readiness Score” and we can then use both the score and the phases to help report on the readiness of an innovation and figure out where we are and what’s next.